I went to Crystal River today, It’s up a few miles from Homossassa Springs, the home of the manatees. Actually, manatees live all over the gulf coast but there seems to be a greater proliferation of them there. There is a nice wildlife zoo there.

Everything in Florida, at least on the gulf coast seems to centered around water. A lot of the communities are on the canals which spread out like fingers from the gulf. Seafood is a big deal here, so are boats and fishing. The boats here look different than what we had when we owned one. The cab/console is in the middle of the boat, they use them for fishing. Not sure why that is. It’s called a walk around. My friend says that it is because if you have a fish on the hook, you can walk around the boat to keep it from getting tangled up. Of course they have  bigger fish in the ocean.

Another thing they have is a lot real estate that is probably never going to be developed. Keep in mind that I am referring to the gulf coast. Some of it seems impenetrable, not somewhere I’d like to go for stroll. The spanish moss is pretty when it drapes the trees but is filled with chiggers red mites. A lot of the area seem marshy and wet. Plus, it seems to be over run with kudzu and other vines.

You see miles and miles of this as you go down the freeway. Occasionally there are abandoned houses that are slowing disintegrating. It’s pretty, but very flat and the roads, at least the highways are amazingly straight. And well maintained. Gas is $3.48 for regular.

At Crystal springs there are Indian mounds. Apparently they piled huge mounds of shellfish shells. Some of them are pretty tall. I climbed the stairs to the top of the biggest one, it was supposed to have had a temple on top, which is no longer there. 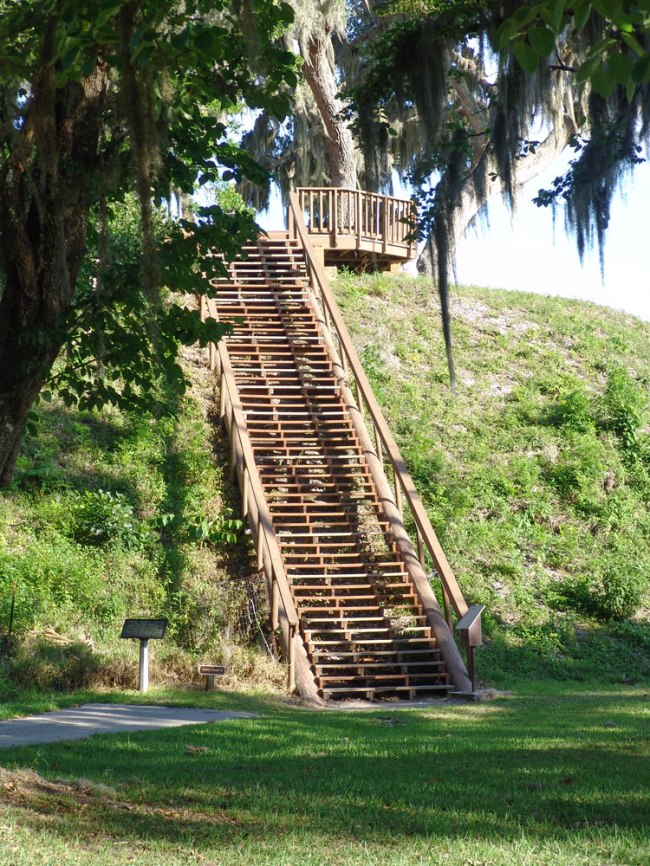 It was a very nice park. I wish I could have taken the boat tour but they don’t have anything on Saturday for tourists. Sigh.

Tomorrow we set out for Georgia.