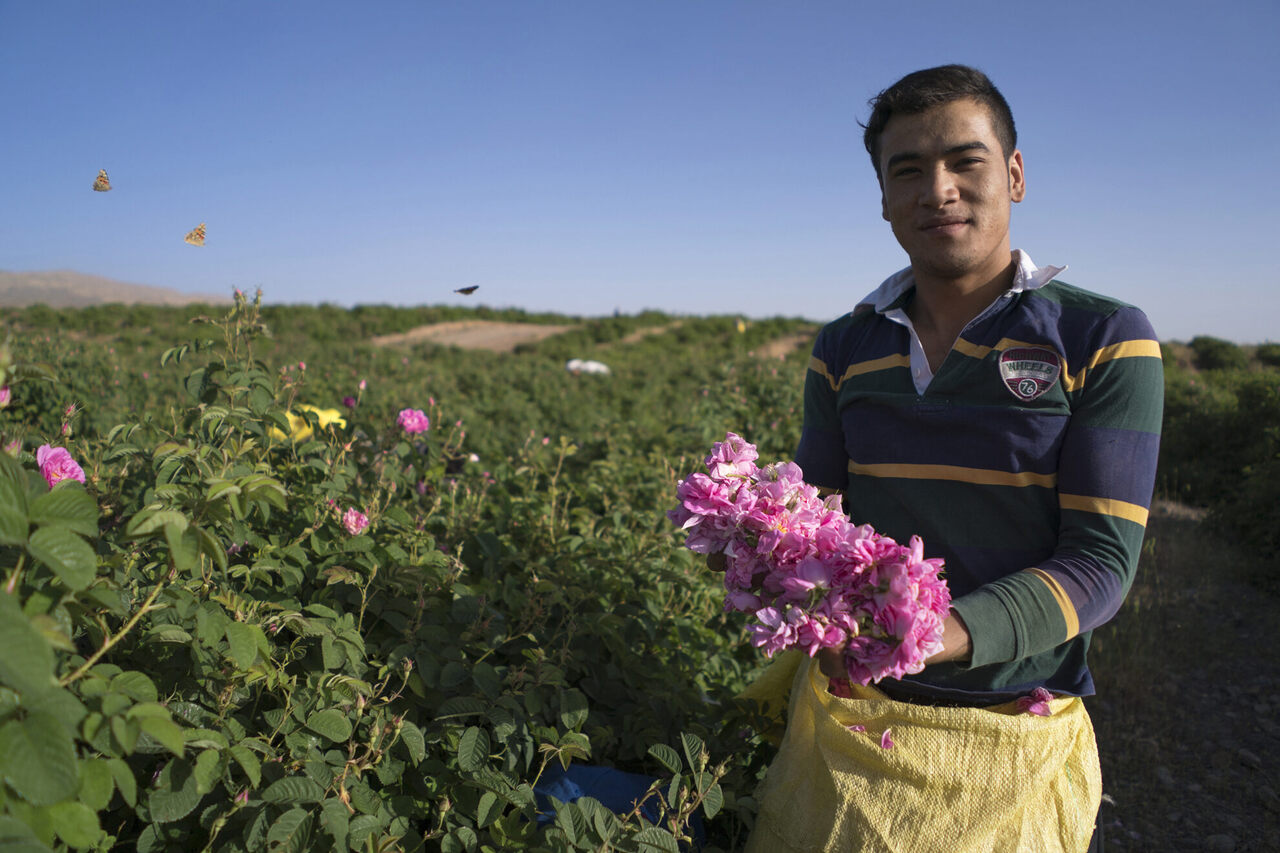 A worker picks roses as butterflies dance over the fields. PHOTOGRAPHY BY EBRAHIM MIRMALEK
1,671

The soft, pink color of dawn still lingers in the sky, and the first golden rays of the sun are just starting to touch the tips of the surrounding mountains. Yet in the rose fields of Qamsar, a small town in the highlands of central Iran, work is already underway. Amid the chirping of nightingales, locals make their way into the fields, where the crisp morning air is heady with the thick aroma of Damask roses.

In a rose field on the outskirts of town, I watch as Javad Jafari picks rose after rose. His calloused, nimble fingers break each stem right below the petals with almost reverential delicacy, before he drops them into a length of cloth tied around his waist and neck. Like many of the other rose pickers who are busy in the fields around us, 66-year-old Jafari has been picking flowers since he was a young boy, helping his father in their family farm, or harvesting the flowers of neighbors. During the rose season, he wakes up at 5 a.m., says his morning prayers, and heads to the fields.

From late May to the middle of June, idyllic Qamsar becomes a dazzling canvas of pink roses. Rows upon rows of the plants, known in Iran as Mohammadi roses, bloom over the course of 25 days. Every year, hordes of tourists from all over the country and abroad come to watch as workers, farmers, and entire families pick roses and distill them into rose water.

The result is a culinary and therapeutic extract that has been used in Iran and the Middle East since ancient times. Qamsar is one of Iran’s main producers of rose water, an ingredient that flavors and aromatizes ice cream, baklava, rice pudding, and many other dishes in the Persian kitchen. Persians also use rose water to treat everything from headaches to heartache, as the fresh graves of the newly deceased are washed with rose water.

Rose water has religious purposes as well. Before the political rifts of recent years between Iran and Saudi Arabia, rose water from Qamsar anointed the Kaaba, the holiest site in Islam, twice a year. “This is the rose of the prophet, you know,” Jafari says, referring to the belief that the prophet Mohammad used the essence of Damask rose for both its fragrance and its therapeutic benefits. While the local name reflects this connection, abroad the rose often goes by Damask. One tale has it that the rose was brought to Europe by a crusader, who picked up the flower in the Syrian city of Damascus.

Yet research done by Dr. Ali Nikbakht, associate professor of horticulture at Isfahan University, postulates that the Damask rose was first grown and used in the Qamsar area 2,500 years ago. “The unique combination of strong sunlight and cool mountain air makes Qamsar ideal for the Mohammadi rose, with the roses grown there having the highest quality in all of Iran,” he says. At the time, rose petals were placed in oil to extract their essence. The first evidence of the steam distillation used today is found in the writings of Avicenna, the 11th-century Persian polymath who used rose water extract for medical purposes.

Edible Book Festivals Are for Pun and Food LoversIn Zambia, a Craze for a Traditional Treat Is Endangering Wild OrchidsThe Swiss Festival That Starts When the Cows Come Home

Jafari then swings a plastic bag containing over 15 kilograms of rose petals over his shoulder, and we make our way to a distillery owned by Haj Reza Aghayee, a relative of Jafari and a second-generation rose water maker. Like many other rose water makers, Aghayee has turned what used to be a seasonal job done by farmers into a full-time business that uses one ton of roses per season. Aghayee attributes the increase in sales to local transportation improvements and the recent popularity of herbal remedies in Iran. 20 years ago, he only sold rose water and a handful of other extracts, such as mint. “But now we sell over a hundred types,” Aghayee says.

Despite this prolific production, his distillery, like most in Qamsar, still employs traditional methods. In the distillery, Aghayee’s son Alireza adds Jafari’s roses, along with petals from other rose pickers, into a round copper still containing 70 liters of water. The amount of rose varies, depending on whether you want a “heavy or light extract,” Alireza explains. Their “two-fire” rose water, an exceptionally potent variety, is only made in small quantities due to its price and the huge amount of roses needed to make it.

Next, Alizera takes a metal lid, called a toghar, and places it on top of the still. Latching it shut, he turns on the flame below the still. Once the mix of petals and water has begun to steam, Alireza connects aluminum tubes to outlet valves on the still, guiding the fragrant steam along the tubes to large flasks submerged in a pool of cold, flowing water. For the next four hours, the steam will condensate and collect in the flask, producing about 40 liters of rose water.

With the process underway, Alireza turns his attention to a previous batch left to distill overnight. After removing the tubes and the lid, Alireza first removes the precious rose oil that has collected at the surface of the flask. He carefully lifts the jelly-like oils with a spoon and collects them in a jar. Later, it will be used to make perfume.

Then, after lifting the filled 40-liter flask from the pool of water with a small ceiling-mounted crane, Alireza pours the freshly distilled rose water into 20-liter tanks for storage. But first, each tank itself is rinsed with rose water to wash out any contamination. Rose water is very sensitive, he notes, and any droplets of water could cause it to prematurely lose its fragrance. Like the making of a unique wine, there are many subtleties to the distillation process. “They may seem like small things, but they make a difference in the final product,” he says.

In addition, the stills are strictly made out of copper, since copper catalyzes certain reactions that remove unwanted flavors. In other parts of the country, straight distillation tubes are traditionally used, yet distilleries in this region have always utilized two upside-down, V-shaped tubes to ensure that any impurities in the vapor are stopped in the upward slope of the pipe. After distillation, rose water is traditionally stored in tinted glass to prevent any loss of the precious scent that occurs with a plastic container. However, these days rose water is predominantly stored in plastic bottles, due to costs and breakage concerns.

Despite the harsh economic times in Iran, the rose water business is thriving as domestic and international demand continuously grows. It’s still only mid-morning, but Alireza has four stills simmering, and he is awaiting the next delivery of flowers. “Business is good,” he says. “We have five stills and we refill them three to four times a day.” His father agrees. “If you’d come here 50 years ago, you’d only find five rose water producers; now there are maybe over 200,” Aghayee says. While Bulgaria and Turkey produce more rose water than Iran, Aghayee sees change coming. “The industry is growing every year,” he says. “And that is great, because rose water is a Persian tradition.”

Gastro Obscura covers the world’s most wondrous food and drink.
Sign up for our email, delivered twice a week.

A plant world sex scandal… Do bell peppers have a gender? Some say they do. The idea has been around for a while but only recently has it caught traction. According to the theory, there are distinct male and female peppers and the gender indicates whether a bell pepper has more seeds or whether it […]

END_OF_DOCUMENT_TOKEN_TO_BE_REPLACED

Tomatoes are native to the coastal highlands of western South America. The early American colonists brought them to America but most people still viewed them with suspicion. Thomas Jefferson mentions planting them in 1809 but they weren’t widely cultivated until after 1830 when tomatoes started popping up in American cookbooks and gardening manuals. America has had a love affair with tomatoes ever since.