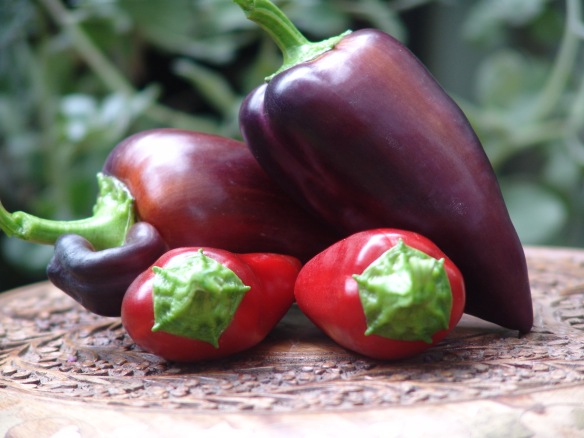 “Violet Sparkle” from my garden.

As most of my friends know, I like my peppers sweet and my tomatoes sweeter! I don’t eat hot or spicy peppers…ever! The sweetest pepper I have eaten up to this point was the Patio Red Marconi, a small golf ball-sized red pepper. I was only able to grow it one year and then couldn’ find the seed anywhere.

A teaching moment here: Most people buy blocky, green peppers in the store for considerably less than the red, yellow and orange ones. The green ones are actually unripe. With a few exceptions (there are some that start out white, chartreuse green, or purple), all peppers begin life green, and will eventually turn some color as they mature. The reason you pay more for the colored fruit is that they stay on the plant longer. Doesn’t matter whether they are hot or sweet peppers, hybrids or heirlooms.

Back to my favorite pepper. While perusing the seed catalogs last January, I was intrigued by a pepper called “Violet Sparkle” carried by Baker Seeds. First, it caught my eye because it was purple. Secondly, it had stripes. I am all over those things. Last night I cut one fo the red ones up and it was by far the sweetest pepper I’ve ever had. No weird aftertaste either. So, in conclusion: starts out purple, stays purple with cream-colored stripes (varies from pepper to pepper), fairly prolific and early, matures to a lovely, deep red, and is the sweetest thing on my plate. What’s not to love? 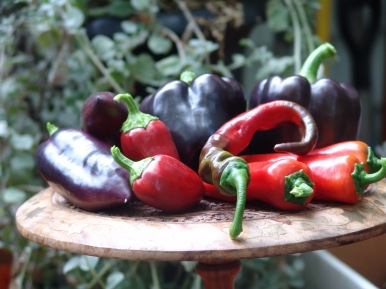 It has been a pretty nice summer so far. Fewer 90 degree days than we normally get. Despite my goal of keeping everything deadheaded, weeded and pruned, the whole thing got away from me when I took two separate trips of a couple days each.  You snooze you lose I guess. You have to figure that an annuals sole purpose in life is to reproduce. When you allow it to set seed it starts declining – rapidly. Throw in some hot days, forgetting to water once or twice and there you have it…a graveyard!

My geraniums are still going strong. I think they are one of my favorite flowers of all tie. Very easy care will live on neglect and comes in many colors, scents, shapes, and sizes.

As I look at pictures I took at the beginning of the season and then more recent ones, I am struck by how much and fast everything grows. Here is a pic of my tomato beds, before and after as well as the bed I put my squashes in … 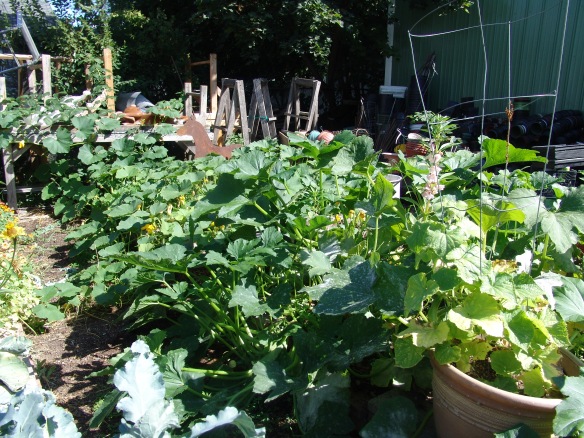 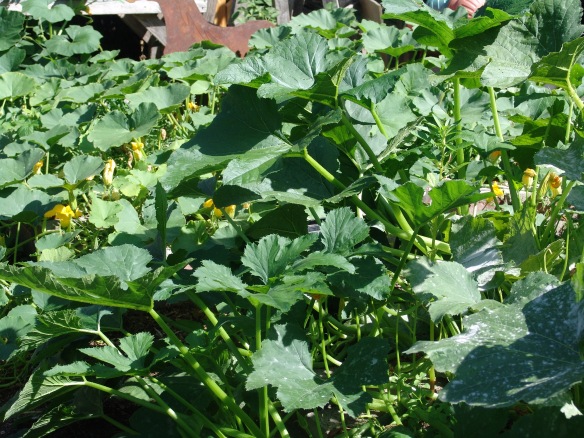 Here are some other pics of my garden bed.

Hard to believe it is almost the end of August. I am going to have to can, we’ve picked so many vegetables. 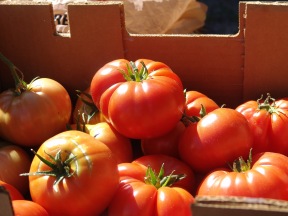 We have been picking broccoli for quite a while now, today, I picked our cauliflower. One was a gorgeous purple and the other a beautiful cheddar yellow. First time I’ve ever grown cauliflower and got something besides a softball size, insect-eaten, inedible object, sprouting flowers. My first introduction to colored cauliflower came from Winco. One day, they were sitting in the produce aisle. As you know I love color. They taste exactly like the white ones but are prettier. Great for a veggie tray although I see cheese sauce in it’s future.

Shown is also one of my white cucumbers (yes, I was going to eat it and cut the ends off and then decided it needed it’s 5 minutes of fame). Love it! Sweet and juicy, not bitter in the least. There is also the spineless Beth Alpha, an Israeli cucumber and several pickling cukes. I think I have enough to make several jars.

The red object is one of my paprika peppers. This is the most amazing pepper plant ever. Let’s face it, peppers are hard to grow here. We always grow our plants in the greenhouse which develops extremely hot temps, probably not unlike a blast furnace. I always tell people don’t beat yourself up if you don’t have success. Some years are better than others.

This one is growing outside, in a large black pot. It was the first one to put on peppers and there are so many that they are crowding the stem. I picked the one that was starting to color up. This one is called “Feher Ozon Paprika” the plant isn’t even two feet tall! This is the first year for this and I will certainly grow it again.

Just a little note: Making your own paprika is easy. Let them dry thoroughly (ok, truth be told, I put mine in a box and promptly forgot them for two years) until crispy, dry and light. They are easy to crumble. Use a coffee grinder to grind as fine as you like. It was a wonder using my own ground paprika, didn’t taste like red dust!