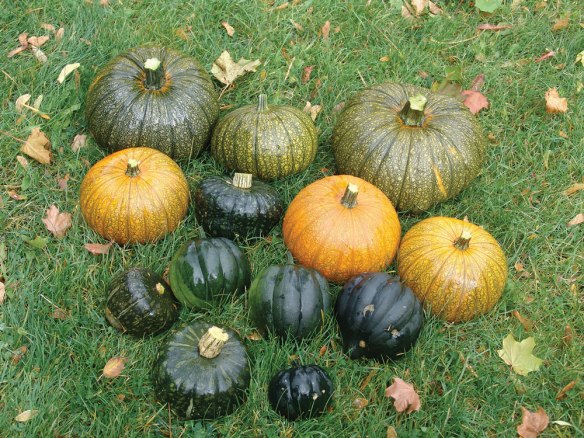 Check out all my squashes! This is what we harvested after our first frost.New England Pie pumpkins (although two of them got a little ahead of themselves and grew a bit bigger than they should have, but I am sure they will be as delectable and sweet for pies as their smaller brethren), Aunt Reba’s acron squash and Uncle David’s Dakota Dessert squash. Whew, what a name. For those of you who wonder where I got my seed, I found a new seed company called Fedco . Frdco Seeds Can’t wait to try these. I like my winter squash sweet and dry so here’s hoping they are as good as their descriptions.

The pie pumpkins were not all the way orange but are turning. They also took over the garden, even running up into a pile of pots we had on the side of the shop.

Uncle David’s Dakota was almost as exuberant. However, I am pleased to say that Aunt Reb’s, as advertised, was not about to take over the world. It stayed in a 3 to 4 foot area, behaving very politely to it’s neighbors. don’t we all wish our own neighbors were as well behaved!

So, you couldn’t feed the neighborhood with this harvest but there are only two of us now and it is enough. My husband would rather have a root canal without out anesthesia than eat winter squash so it’s all on me. Yummmmmmm/